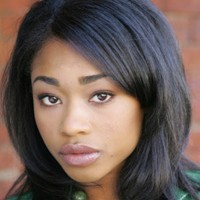 A native of California, Farelle made her acting debut while still in her mother’s womb – – in a “Gerber” baby food commercial. She entered this world with a mission to move people through her Godgiven talent. No matter where Farelle went, what role she read for, or what degree she obtained, she still wasn’t satisfied.  Farelle believes the Lord God Himself had a special way of shining a beacon of light in the right direction.  She took that direction, and found herself being surrounded by a positive, blessed, fruitful number of people.

She was called upon by the casting directors of a feature entitled “Studio,” and booked it with a smile.  That wasn’t enough for her; she kept on pushing and was soon called in for the audition of a lifetime.  When Farelle met playwright Layon Gray, she was finally able to put her “glow” (as she calls it) to work on material that moves not only everyone in the seats, but the very essence of her soul.

Farelle has participated as lead actress in the NAACP Award winning play: “The Girls of Summer”.  She didn’t let it stop there though. She took her career by the reins and took on other original theatrical masterpieces such as “Soldier’s don’t Cry“, “Diary of a Catholic School Dropout”, and “Searching For Willie Lynch”.

With a strong desire to be balanced in this industry, Farelle took on numerous stage-managing positions, allowing her to see acting from a different, yet valuable, standpoint. It was during this period that she decided it was a perfect time to exhibit her comedic strengths. So when she came across a comedic pilot scheduled to be filmed by Dubose Entertainment, she decided this was it.

Farelle packed her confidence and her biggest grin, walked in with the confidence she was raised with, and she used it to book the # 1 show on the Viacom network today; “HELL DATE.” Once BET picked up the pilot episode of “HELL DATE,” it became apparent that the networks excitement was mutually exclusive with her own, and they made Farelle the main ringer for the show.

Farelle has traveled around the states to help promote the very popular series, including a recent special appearance and interview on “The Maury Povich Show,” and BET’s “106th N` Park”.

Farelle is an active member of the prestigious LAAAREP theatre company, and has been able to experience on a first hand basis, the optimistic energy of a true force filled with perseverance and talent.  Farelle gives the most thanks to God who blessed her with not only talent but also a strong mother who taught her the ropes. Renee Gordon (mommie), by far the most beautiful, delightful, spirited woman

Farelle has met, lives her life by example. Renee taught Farelle how to set her own path, be proud of the journey she takes, and embrace the process. Very thankful for all opportunities and blessed to be able to share that “glow” with this world, she stands proud of herself and her many friends. Farelle is now working personally with Rupert Francisco under the management team at Timely Entertainment, Inc. She can be reached through www.TimelyEnt.Com or in the lovely world of myspace at www.myspace.com/farelle.  January 1st is the launch of www.farellewalker.com.